To visit Gary’s bench and raise money for awareness and screening for esophageal cancer! Over the last thirteen years, over $133,000.00 has been raised in total for RCH. In August 2014 two gastroscopes were purchased for $46,133.00. The first scope is a general gastroscope that is used every day at RCH, to treat acute bleeding from ulcers or varices arising from liver disease. This equipment allows the physician to diagnose and treat the problem all in one procedure by taking biopsies. The second scope is a nasal-jejunal gastroscope. This is a special piece of equipment that is used for patients who cannot be sedated or have illnesses causing strictures which will not allow the use of normal gastroscopes. With newer gastroscopes, physicians are able to obtain higher HD resolution and diagnose illness with greater accuracy.

The third scope purchased in 2017, is a transnasal scope for $38,121.09. It is a thin scope, less than half the size of the conventional EGD scope. It provides excellent visualization of the throat, esophagus, upper stomach, lower stomach and the duodenum (first part of the small intestine). It assists in detecting esophageal masses that may not be detectable with the use of a regular sized scope.

In 2021, RCH purchased an Olympus ESG300 with the generosity of Gary’s Walk supporters. This system is the latest generation of electrosurgical devices designed exclusively for GI and pulmonary, and includes all of the modes and settings required by physicians performing advanced therapeutic procedures including those that may require argon plasma coagulation (APC).

Over the last four years over $40,000 was raised for equipment that would detect cancer at RCH.

June 7th 2012 another $11,929.00 was given to Royal Columbian Hospital. More money that will be put towards the purchase of a gastroscopic radial ultrasound scope in the future

May 6th was the Third Annual Walk at Minnekhada

Interviewed on Global BC News

Global News Interviewed the Smith family and posted the news clip on Health Headline on Heartburn on May 2, 2012

Feb 27th Jay Triano- former head coach of NBA’s Toronto Raptors, made a radio announcement about the signs and symptoms of Esophageal Cancer. It was broadcasted on local Bell Media radio stations.

Over $27,000 was raised and will go towards the purchase of gastroscope in the future to detect cancer at the Royal Columbian Hospital.

April 17th was the Second Annual Walk at Minnekhada

Royal Columbia Hospital along with Fraser Health published a ‘What you need to know about Esophageal Cancer’ pamphlet. It has Gary’s story on the back and was distributed to medical offices around BC

Article published in the local paper about Gary’s Walk.

An article about Gary and the walk was included in the Royal Columbian insert in the Vancouver Sun paper.

April 25th was the First Annual Walk at Minnekhada

A memorial bench was placed in the park.

BC Basketball Hall of Fame

Gary was inducted into the British Columbia Basketball Hall of Fame

Gary is diagnosed with esophageal cancer

Gary suffers from back pain

Gary starts to suffer from back pain symptoms. 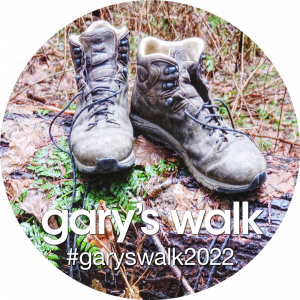 For the month of April, 2022 we have decided to do a virtual walk again to accommodate the covid limitations.
A virtual walk is a real walk, but on your terms: You get choose your own course, what time you start, and who walks next to you! The walking is real—it’s the community that’s virtual.
We encourage you to post a picture to Gary’s Walk Facebook page or on Twitter @GarysWalk or Instagram [email protected]  of your walk or activity in memory of Gary.
Donating to Gary’s walk is the same. Just go to RCH Foundation or click on the link Donate on our website.

The bench is on the Lodge Trail near the picnic area.